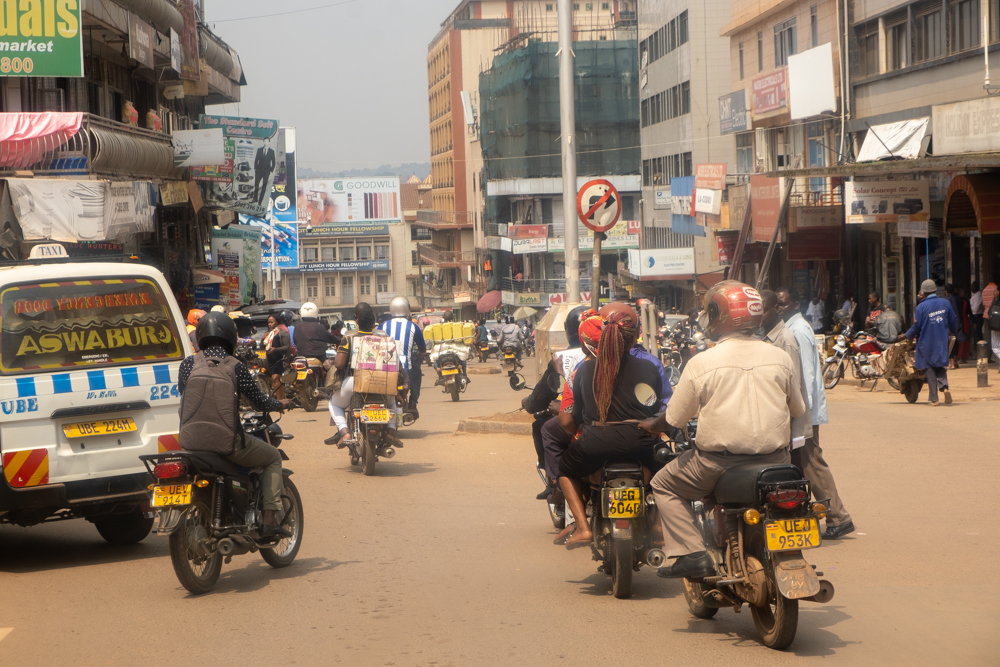 A Report from Stephanie Langer and Marco Villard.

After a long journey through Brussels, Kigali – the capital of Rwanda and Entebbe to Kampala – today’s capital city of Uganda, we land in the middle of exciting crowds. While Monika and Sigrid are already experienced Ugandan Travelers, Marcos and Stephanie are visiting sub-Saharan Africa for the first time. The entire Stream of Life team arrives at the airport to meet them them and welcomes them warmly.

The next morning John Banura, a safari entrepreneur, picks us up to help us with the challenging roads in Kampala and the surrounding villages for the next two weeks. We then have the chance to see Kampala for the first time in daylight. The colours are drastically different than what we are used to in Europe and the streets are bustling with activity.

Kampala – full of colors and a bit chaotic

The shops in Kampala usually consist of only one room. Fruit merchants alternate wildly with tailors, hairdressers and car or motorcycle repair shops. In between them butchers and restaurants bring their wares to patrons on the side of the road to sell. The streets are all red in colour, which is typical of the African soil. It is the end of the rainy season and almost every day there is heavy rainfall at least once. Only a few of the streets are paved and there are no sidewalks to speak of, so pedestrians just walk along the edges of the roads.

In Uganda there is a huge environmental impact from the red dust and smog. Many dirty trucks are on the move, and most are more than 20 years old and blow unfiltered, black clouds from their exhaust. Weaving between them are motorcycles. Most are “Bodadoda“, which are a type of motorcycle-taxi. Heating and cooking is done with charcoal and the plastic waste is simply burnt. The smoke, smog and traffic noise make the biggest impression on us.

Religion and Education are important

The population holds very strong religious beliefs. Mostly Christian, but also Muslim. Religion is clearly advertised by car signs, road side preachers, and countless small and large churches and mosques. The construction of one of the largest mosques was funded by Muammar al-Gaddaffi, the former ruler of Libya.

Everyone here is pursing their own personal happiness and are aware that only education leads to a better life. The adults do not want money only for food support so that their children can go to school. As soon as their financial situation permits, the children go to school (which is flexible throughout the year.) There are a lot of young people in Uganda – almost 48% of the population is under 14 years old – so the school system is especially important. The children are often in school from 8 until 18 o’clock. The way to school in some cases can be upwards of two hours. Almost all the schools are religious, with the majority being Christian.

In Kampala, we feel quite safe against any dangers. White people stand out and valuables should not be left unattended. The people of Uganda are usually very friendly and helpful, so we never feel very threatened. The slums in Kampala consist of mostly cheap construction brick houses. Mostly it is impossibly small rooms for families. People all have their dreams though, they may not be completely satisfied, but their life is characterized by a great faith in God. Uganda is working hard to ensure that all villages are provided with electricity.

Right at the beginning of our stay, we distribute gifts we had brought along to the children. These were mainly donated by sponsors: hats, pencil cases, sweets but also functional things like laptops, scanners and printers. Any funds given to us are directly donated to the respective recipients. Stephanie and Sigrid are shopping for days for furniture, (tables, armchairs, bed and mattresses.) two charcoal ovens for cooking and kitchen equipment (such as plates, cutlery and pots).

Monika, Stephanie, Sigi and Marco provide entrepreneurial guidance and helped create business plans. We learn that the concept of networking doesn’t exist here. People are happy to provide help to one another but the principle of synergentic cooperation is foreign to them. As well as continuing our projects, our ultimate goal is to bring our understanding of entrepreneurial cultural closer to our friends in Uganda for more efficient cooperation.