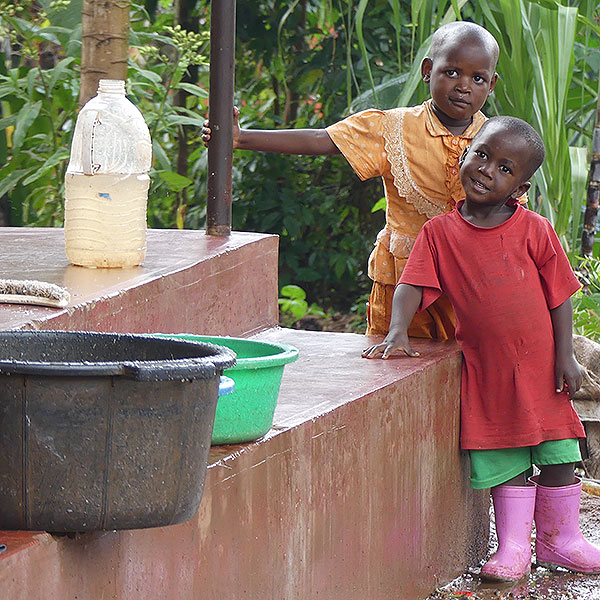 Emily and the Island Kids

A report from Stephanie Langer.

Her name is Emily N. and her story is turbulent and inspiring. She is one of our project partners on the Ssese Islands on Lake Victoria and founded the organization ‘Island Kids in Uganda’. Orphaned, abandoned and poverty-stricken children find shelter, food and medical care there. Today, however, we want to tell Emily’s story and why her projects are so important to us.

As it is the case with so many African children, Emily’s parents died of AIDS. At that time, she was studying at Makerere University and the new circumstances put her in a precarious situation. She could no longer finance her studies on her own and additionally, she had to take care of her three siblings and her grandmother. Emily was afraid and she was looking for girls who were in a similar situation to work together on solutions to their problems. She founded the ‘Foundation for the Promotion of the Education of Girls’. However, the work on the market and the studies could not be reconciled in the long run and the project failed.

Soon after, a fellow student became pregnant. To prevent an abortion, Emily supported her friend during and after her pregnancy as best as she could. Twins saw the light of the day and Emily had found her destiny. She discontinued her studies to help disadvantaged children.

In 2007, her ‘family’ had grown to 15 children and 5 helping adults. Emily sold her parents’ house and bought a piece of land in the Ssese Islands. Together with her husband, she dedicated herself to raising and caring for children who have never had a family. In time, the state also gave them children who had been mistreated, abandoned or whose parents had died. The cycle began to close. Some of these children became teachers and returned to Emily and her orphanage. Together with the villagers, the Ssese Island School was built in 2016. The school started with two teachers, an assistant and 30 pupils. Everything was fine. In 2017, however, when the government banned fishing in Lake Victoria, people who used illegal fishing methods were arrested. Houses were burned down, and children were left abandoned in the forest. In cooperation with her team, Emily constructed a building in which the children found a new home. Emily’s not just about giving the kids a roof over their heads and providing them with food. Their dream is to make these children responsible, resilient, versatile, loving and caring members of a future society. That is why the initiative ‘Island Kids Uganda’ came into being – to reach the world outside the Ssese Islands and to realize this dream together.

Emily has reached us – especially with her impressive story, which shows how beautiful it is when things intertwine, when you have found your way and are ready to go. Their concern to give orphaned, abandoned and in extreme poverty living children a chance, regardless of gender, religion, tribe, anomalies as well as children with or without parents has also impressed us. This is the story of Island Kids Uganda and we want to go all the way together with Emily.